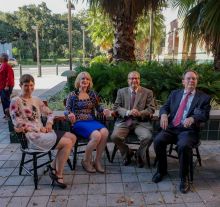 The University of Florida Health Science Center held it’s fifth annual Celebrating Distinction ceremony to recognize those faculty members who have recently been named to an endowed professorship or chair. The event was held October 26, 2016 in the DeWeese Auditorium at the McKnight Brain Institute. The Department of Psychiatry had four faculty members receive recognition at this year’s event.

Regina Bussing, MD was awarded the Donald R. Dizney Chair in Psychiatry. Established in 2006 by Donald and Irene Disney, this fund supports a chair to be held by a professor and department chair of psychiatry at the UF College of Medicine.

Donald Dizney serves as chariman of the board of United Medical Corp., which owns and operates San Jorge Children’s Hospital, the Caribbean’s largest freestanding children’s hospital. Founded in 1973, United Medical has also developed several chains of specialty hospitals and is a partner in joint venture affiliations with some of the nation’s largest nonprofit networks and proprietary public companies.

Dr. Bussing was named the chair of the UF College of Medicine department of psychiatry in May. She paves the way in developing comprehensive treatments for attention deficit hyperactivity disorder, or ADHD, and other mental health disorders experienced in childhood and adolescence. Dr. Bussing is a professor of psychiatry and pediatrics at the College of Medicine, and clinical and health psychology at the College of Public Health and Health Professions.

Dr. Carol Mathews was awarded the Brooke Professorship.The Brooke Professorship gift was established by an anonymous donor to support a professorship in the UF College of Medicine department of psychiatry to focus on therapeutic interventions for obsessive-compulsive and other anxiety-related disorders. The department of psychiatry is creating a center of excellence in anxiety-related disorders and will soon be the leading clinical program for the evaluation and treatment of such disorders in the southeastern United States.

Dr. Mathews joined the UF College of Medicine faculty in 2015 as a professor in the department of psychiatry. She is a board-certified psychiatrist with research and clinical experience in obsessive-compulsive disorder and Tourette syndrome.

Her research focuses on how one’s culture, environment and genes interact to influence the development and expression of neuropsychiatric syndromes and symptoms, including tic disorder, anxiety, obsessive-compulsive disorder, attention deficit hyperactivity disorder and compulsive hoarding.

Carter A. Pottash specializes in addiction psychiatry and is president of Florida Consultation Services, providing psychiatric consultation to patients in Palm Beach. He aslo serves as president and chair of Stony Lodge Hospital in Ossinin, New York. He graduated from Yale University School of Medicine in 1984 and completed residencies at Yale, Baystate Medical Center in Springfield Massachusetts. Pottash is also a clinical professor of psychiatry at New York University and a distinguished fellow of the American Psychiatric Association.

Dr. Teitelbaum serves as vice chair of the UF College of Medicine department of psychiatry and the training director for the UF Addiction Medicine Fellowship. He is also the medical director of the UF Health Florida Recovery Center, which offers detoxification, stabilization, outpatient rehabilitation, counseling and support groups for those suffering from drug and alcohol addiction.

Dr. Ward is an associate professor in the UF College of Medicine department of psychiatry and vice chair and chief of adult outpatient services. He has been a pioneer in the development of brain stimulation treatments for psychiatric diseases. Dr. Ward’s interests lie in the diagnosis and treatment of anxiety and depressive disorders, as well as other mood disorders.