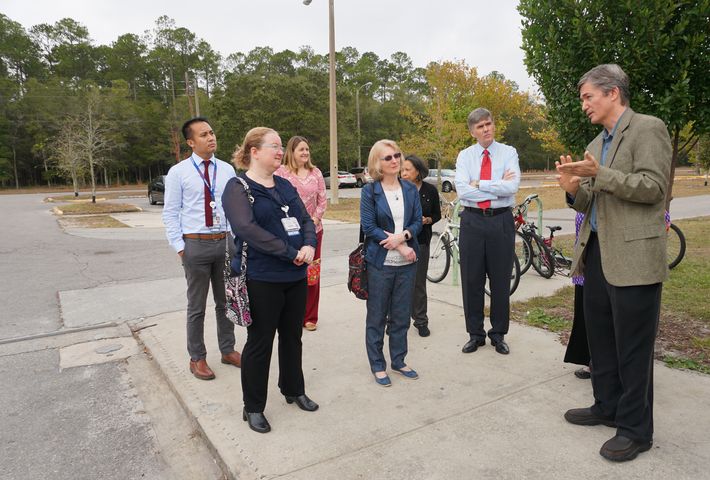 Dean Good of the UF College of Medicine, Dr. Regina Bussing, Chair of the Department of Psychiatry and other members of the department get a tour of the GRACE Marketplace Campus

A collaboration between the city of Gainesville and Alachua county, GRACE Marketplace opened its doors in the May of 2014 to address homelessness in the Gainesville community and its surrounding areas. Originally, GRACE was intended to be part of a ten-year plan to end homelessness in Gainesville. Now GRACE is part of a North Central Florida Continuum of Care program to transition to permanent housing options.

GRACE is a campus-style housing site that also offers services, including laundry, meals, restrooms/showers, transportation and educational programs, to individuals who do not live on the site. According to a WUFT article from early 2016, it costs over $2 million to fund GRACE for a year.

Many GRACE residents have an acute need for psychiatric care. Karen Slevin said that patients at GRACE can have a difficult time accessing care outside of certain hours. GRACE is working towards have a variety of services that can be offered from within GRACE.  Jon DeCarmine, in the final leg of the tour, voiced hope for more academic collaborations between GRACE and the University of Florida. In fields like public health, “There are hundreds of masters’ theses that could be written about GRACE,” said DeCarmine.

To learn more about GRACE Marketplace visit their website at http://gracemarketplace.org/